Skip to main content
It looks like you're using Internet Explorer 11 or older. This website works best with modern browsers such as the latest versions of Chrome, Firefox, Safari, and Edge. If you continue with this browser, you may see unexpected results.

Political Strategy in Unconventional Warfare: Opportunities Lost in Eastern Syria and Preparing for the Future by Carole A. O’Leary and Nicholas A. Heras

Framed by more than three decades of anthropological research experience working in Syria and surrounding Middle Eastern countries, and experience working with both U.S. development and military entities, Dr. O’Leary and Mr. Heras offer a sociocultural and political analysis valuable for deployed SOF. They contend that the political strategy necessary for sustainable strategic effect in the unconventional warfare (UW) component of the counterterrorism operation against the Islamic State of Iraq and Syria (ISIS) was subordinated to the operational level imperative to cultivate a viable proxy force. The authors offer SOF a way to conceptualize strategic political analysis for UW efforts using Syria as a recent case study, but also provide a glimmer of hope for consolidating the gains made there in support of national policy.

In Advancing SOF Cultural Engagement: The Malinowski Model for a Qualitative Approach, Robert Greene Sands and Darby Arakelian propose a special operations relevant model for engaging populations, illuminating their worldviews and values, appreciating their interests, and translating significant social, cultural, and political information into operational analysis. Their objectives are to introduce the core concepts, the base vocabulary, and the foundational skills in anthropology and sociology necessary for improving the human aspects core competency. While Greene Sands and Arakelian do not expect SOF to become anthropologists, they assert that Malinowski’s population-centric research methods are desperately needed to make sense of contemporary human aspects of military operations.

Property Rights and Social Justice as an Indicator of Stability: The SOF Nexus by Bill Mandrick.

The role of economics in the generation and mitigation of grievances is well documented and understood. Likewise, the reliance on economic documents forms the basis for credible economic systems worldwide. For the Special Operations Forces (SOF) professional, however, the issues of property rights, economic development, and the generation of wealth are more nuanced and central to the successful completion of SOF missions in failing and failed states. As Colonel Bill Mandrick demonstrates in this monograph, a nation-state's failure to have in place a system for the equitable access to and the sharing of economic activity is a guarantor of grievances, anger, and instability. So too is the failure to enforce an existing system of property rights and economic opportunity. He argues that an awareness of the economic records of a nation-state provides useful insights into its stability and can provide important intelligence to expand SOF situational awareness and support SOF mission planning.

In a 2009 JSOU Press monograph reflecting on the education requirements for Special Operations Forces (SOF) personnel, Brigadier General Russ Howard (U.S. Army, retired) identified “cultural competency” as critical to SOF professional development. He returns to this theme with researchers Greta Hanson and Carly Laywell by answering this question: Why can some people act effectively in new cultures or among people with unfamiliar backgrounds while others, even highly respected people within their own group, stumble in those same situations? The research team asserts that cultural intelligence (CQ) makes the difference and describes a proficiency that goes beyond simply being intelligent, emotionally mature, or having good general social skills. Their message to SOF is that a person with high CQ, whether cultivated or innate, can understand and master situations, persevere, and do the right thing.

Dr. Greene Sands’ Assessing Special Operations Forces Language, Region, and Culture Needs uses his vast experience and knowledge of this subject and draws from the existing Department of Defense Defense Language Transformation Roadmap (DLRT), recent lessons learned, and historical beginnings to outline the importance to the U.S. military, especially the Special Operations Forces (SOF) community. The past decade of counterinsurgency operations has challenged the U.S. military personnel in their ability to carry out a variety of missions involving culturally complex situations and interactions. Success in such operations often depends on difficult linguistic and interpersonal skill-based competencies and abilities. Dr. Sands emphasizes the utility of language skills, along with regional and cultural knowledge and cross-cultural competence, in engaging populations across sometimes uncompromising cultural divides. This monograph provides key lessons learned as U.S. Special Operations Command determines the way ahead for LRC education and training to better prepare the future SOF operator to meet the challenges of operating in complex environments and meet the command’s priority to continue to build relationships. 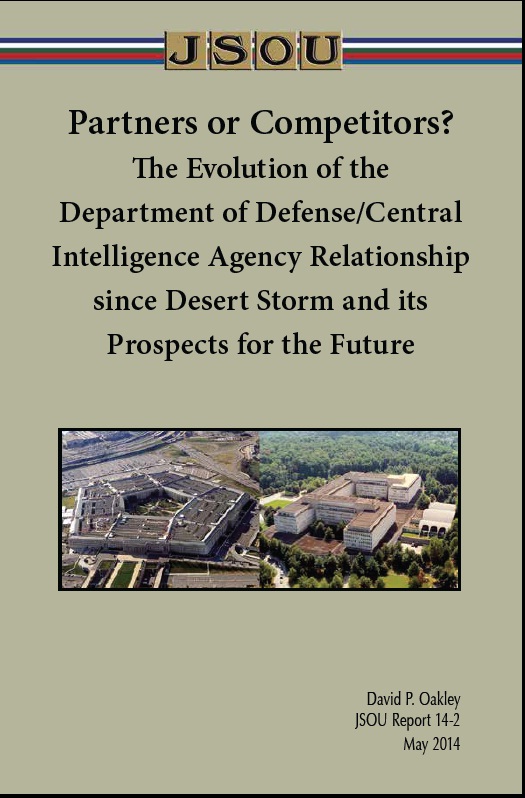 Partners or Competitors? The Evolution of the Department of Defense/Central Intelligence Agency Relationship since Desert Storm and its Prospects for the Future by David P. Oakley

To understand the historical and contemporary context of the CIA/DOD relationship, Major David Oakley draws on secondary sources for his academic research supplemented by primary sources of personal interview with two former Chairmen of the United States Senate Select Committee on Intelligence, interviews with previous and current DOD and CIA leadership, government documents, and written first-person accounts. These primary sources add a new dimension and uniqueness to his research. Although the CIA and DOD relationship expanded significantly following the 9/11 terrorist attacks, its foundation was set 10 years earler in the aftermath of Desert Storm and in the Cold War's twilight glow. During this period, congressional policy pronouncements and organizational changes within institutions increased the communication and liaison partnerships between the CIA and DOD, establishing the foundation for greater interoperability after 1992. These changes established conditions that enabled the blossoming of the relationship since 2001. 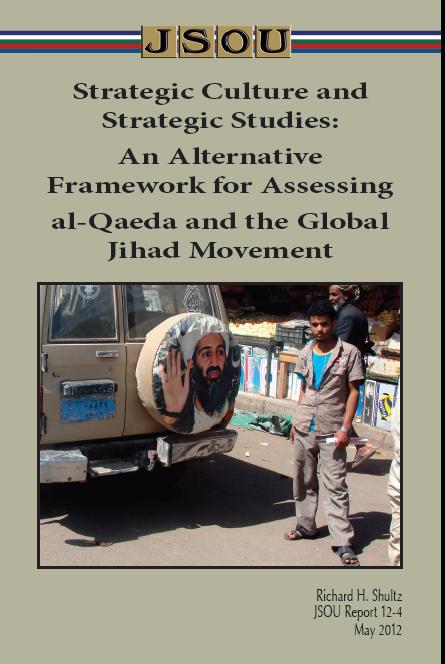 Counterterrorism (CT) policy is like a game of chess.  It often evolves as the result of a terrorist act or campaign.  The objective of an effective CT policy is to identify and address the conditions that lead a terrorist group to act.  It requires all facets  of political, military, intelligence, and law enforcement planning to identify the root causes before a common thread binds these causes into a definable terrorist group.  The history of Indonesia is defined by struggle: the struggle for independence from Dutch colonial rule, the struggle to establish the Islamic State of Indonesia, the struggle for self determination by the people of Indonesia from an authoritarian regime.  These all play significant roles in the psyche of the population.    This paper is simply an academic analysis of the strategic and operational environment in Indonesia prior to the Bali bombings.  It is organized into five chapters that focus on the terrorist group Jemaah Islamiyah (JI).  The overall intent of the first chapter is twofold.  First, it aims to academically examine the origins of JI in terms of the antecedent conditions that,  collectively, led to its creation and decision to conduct terrorist activities.  Second, it hopes to identify the actors that helped to bond the antecedents together.

The 4th Military Information Support Group (MISG) is the only active military information support group in the Department of Defense and operates across the full spectrum of military operations.  In 2006, then Secretary of Defense Donald Rumsfeld designated the 4th MISG as a special operations unit.  In practice and by doctrine, special operations units possess highly specialized skills that they use in the routine execution of high-risk, politically sensitive missions.  Prior to 2006, the 4th MISG primarily supported general-purpose forces and its mission profile was random, broad, and unremarkable.

Today U.S. national security is threatened by violent extremist groups operating from sanctuaries in hard to reach areas of Afghanistan, Pakistan, Yemen, Somalia, and similar areas in the Pacific Rim and Latin America. It seems probable that there will be a marked increase in our need to disrupt and destroy enemy forces in multiple sanctuaries around the globe as we proceed to march through the 21st century. Celeski's paper provides a vision of the future SOF wherein hunter-killer teams could have a significant role to play in finding, disrupting, and destroying the enemy.

Manhunting: Counter-Network Organization for Irregular Warfare by George A. Crawford

Despite the increasing employment of manhunting, the U.S. national security establishment has not developed appropriate doctrine, dealt with challenging legal issues, nor has it organized forces and assigned clear responsibility to deploy and employ these capabilities. Manhunting could become an important element of future U.S. national security policy, as highly trained teams disrupt or disintegrate human networks. This monograph reviews historical cases related to manhunting and derives lessons from a large number of these historical manhunting operations. Building on these lessons, the monograph then explores potential doctrine, evaluates possible organizational structures, and examines how to best address the responsibility to develop manhunting as a capability for American national security.

Joe Celeski's current work on the role of policing in confronting security threats highlights the need to shift resources and emphasis towards policing, law enforcement, and internal security. Law enforcement and internal security are key pillars in a comprehensive national security strategy and are often under-emphasized. As the campaign against terrorist networks shifts out of a combat phase, the competition between governments and terrorist groups for the public's support, a key element in irregular warfare, will occur in noncombat zones.

In this paper, Dr. William G. Perry provides guidelines about processing computer equipment for transfer to information and intelligence professionals who might wring out from digital storage media the critical information needed to penetrate the enemy's decision matrix. In addition, captured computer gear may often need to be protected by a chain of custody in order to support legal actions against illegal combatants-criminals. Note: This paper is not available in hard copy

Dr. Turbiville's latest monograph has significant implications for U.S. Special Operations Forces as we continue to operate in both combat and noncombat zones against groups desiring to overthrow existing governments. We must take into account the insurgent organization's plans and operations, but to do so will require us and our local hosts to overcome the insurgent or terrorist group's internal security processes while protecting our operations and organizations from insurgent infiltration.

Russell Howard's paper focuses on intelligence operations within denied areas and how these operations today differ from those of the Cold War period. Today, the preeminent threat is transnational, violent terrorist groups that operate under the cover of failed or weak states, as well as under the civil protections afforded in western liberal democracies. Howard focuses on the operational environments in failed or weak states as he discusses ways to improve intelligence targeting and collection in these challenging areas.